The musical vision of Sequentia Legenda

The essentials of the Berlin School 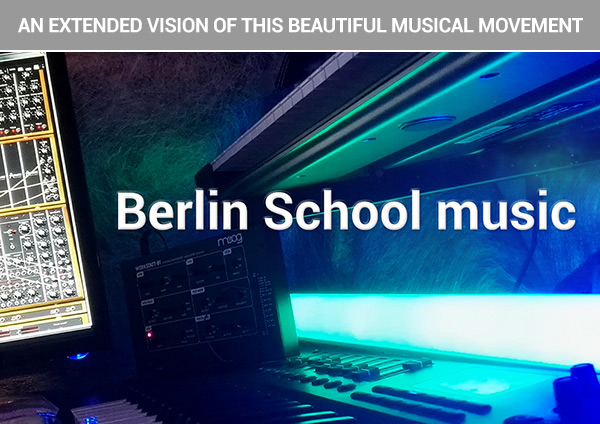 Rigour, Sensitivity and Creativity are my motto 🎯

I have no intention of reinventing or revolutionizing the Berlin School,
I simply and without pretensions wish to bring my palette of sound, an extra colour and to be able to lay my stone to this edifice in order to contribute to an extended vision of this beautiful musical movement.

I sometimes hear myself say that solos are absent from my compositions.
They are not the fundamentals of my music, nor my priority.
It is neither a sign of immaturity nor an oversight, it is simply my musical vision, a well thought out vision. Nevertheless, although sometimes subtle and furtive, the musical phrases, the melodic lines are present in my soundscapes.

I'm not racing for solos, effects or instruments, but I'm looking for the purest possible overall atmosphere, which is representative of what a Berlin School music is to me. On the other hand, rigour, sensitivity and creativity are my motto. Play on nuances, on transpositions, find the balance between harmony and timbrality.

It is essential for me to go back to the essential:
towards a return to the sources of the Berlin School 🎯 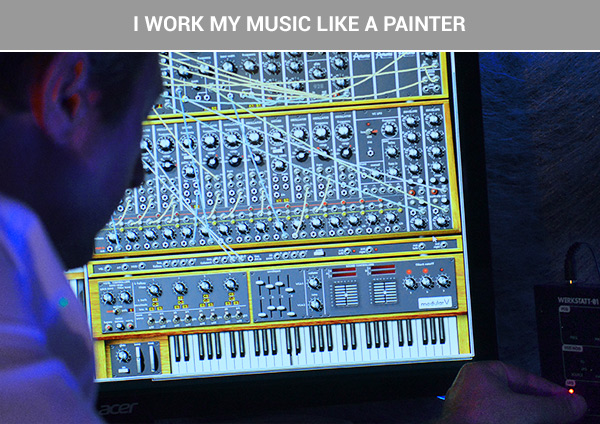 Speak to the listener's heart and soul 🎨

During my childhood, I did painting and today I work on my music like a painter.
I use a sound palette to paint the background of my canvas. Then, in a progressive way and with great sensitivity, I emphasize certain details, I maximize certain contrasts, I mix colors to give shape and life to the sound panorama.

It is essential for me to offer the listener a total freedom of listening, a musical space that reveals itself to the listener, offering new surprises and discoveries. They are instrumental journeys, immersive worlds, where music gives free rein to the imagination.

I see my music as an invitation, as a sharing with the listener, as my language expressing my emotions and speaking to the listener's heart and soul. 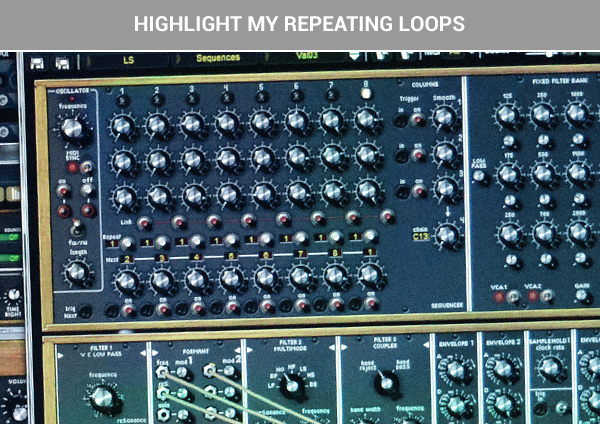 ⚒️ Notes after notes I sculpt the sequence 🎼

One of my favorite tools is the sequencer.

I manage with him to bring out my repetitive loops.
In this phase of work, I am like a sculptor, who notes after notes sculpt the sequence, working the sound material with rigour, sensitivity and patience.

Setting up sequential lines is often time-consuming, but it's the price to pay for a result that meets my expectations. I am a demanding person, looking to do my best to get the most out of myself. The sequencer, the sequences, are the pillars of my structure.

My vision of sequencing: loops in perpetual evolution. 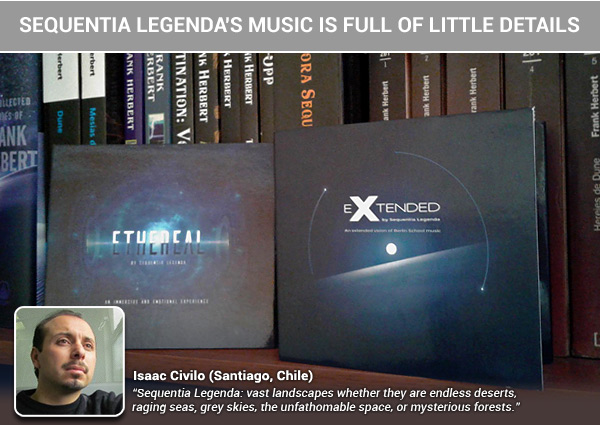 Isaac Civilo (Santiago, Chile): "There is a reason why I chose to take pictures of the latest albums by Sequentia Legenda next to my Frank Herbert collection
(and other sci-fi authors).

As many people know, Frank Herbert was one of the greatest, if not the greatest science fiction author, but his books were never rooted in space ships, laser beams, and technology in general. On the contrary, they are very philosophical. When I started reading Dune I was 13 years old and I was impressed by the vast landscapes his writing conjured up in my mind.

I have the same feeling when I listen to Sequentia Legenda:
vast landscapes whether they are endless deserts, raging seas, grey skies, the unfathomable space, or mysterious forests. And, same as those places, its compositions incredibly nuanced, sometimes peaceful and reflective, sometimes dynamic and furious.

Sequentia Legenda's music is full of little details that can only be absorbed after repeated listenings which is, after all, the true hallmark of good music.
And, another little reference:
Dune by Klaus Schulze was also inspired by Dune so there is definitely an invisible thread that ties all of us together in this sonic world."

After an introduction to experimental, concrete and drones sounds, the enigmatic atmosphere gradually fades away and gives way to a benevolent global atmosphere.

The arrival of the luminous pads, supported punctually by Gregorian-style choirs, amplifies the notion of infinity. The soundtrack is then filled with multiple layers and sequential loops.

Later, a regular and deep pulse joins the ensemble to give even more life. It is like a heart that begins to beat, heralding a rhythmic surge.

The snare drum, then a roll of toms complete the climax of this composition, leaving the vaporous pads and the empathetic choirs ornamented with the atmospheric and spiritual finale. It is peace, contemplative, here and now (Ici et Maintenant),
a return to the roots of the Berlin School.