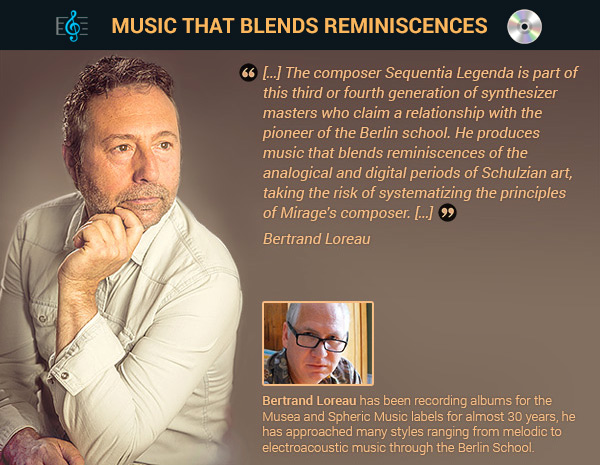 A RELATIONSHIP WITH THE PIONEER OF THE BERLIN SCHOOL

"Since the 1980s many artists have been attracted to electronic music, and synthesizers, after discovering the works of Klaus Schulze. Timewind, Moondawn, Mirage, Dune and to a lesser extent Trancefer and Audentity made the German composer a model that many wanted to imitate. Schulze produced his masterpieces in a period from the advent of analog to the beginning of digital.

The composer Sequentia Legenda is part of this third or fourth generation of synthesizer masters who claim a relationship with the pioneer of the Berlin school. He produces music that blends reminiscences of the analogical and digital periods of Schulzian art, taking the risk of systematizing the principles of Mirage's composer. We find the sequences that curl up on the entire face of a huge vinyl, and the transpositions that resound like thunderclaps to provoke the expected thrill. But Sequentia sometimes goes beyond what Schulze did in the 70s as if he was trying to go beyond the limits imposed by the master in order not to create ruptures with his audience. Chords can be held for several minutes and sequences are built and deconstructed by separate elements during very slow and subtle mixing. Sequentia Legenda takes the risk of sometimes disturbing and being perceived as a mere interpreter of recipes already often used in cosmic music. But you have to see it differently. Sequentia Legenda explores the limits of musical concepts that may not have said everything. His work on sound and his desire to hypnotize, rather than seduce, make his works establish a bridge that may not have existed between real Berlin School music and ambient music. By avoiding solos and ruptures, his music can be perceived as an accompaniment to an imaginary place or space, in the same way as some
of Brian Eno's works."

Bertrand Loreau has been recording albums for the Musea and Spheric Music labels for almost 30 years, he has approached many styles ranging from melodic to electroacoustic music through the Berlin School. 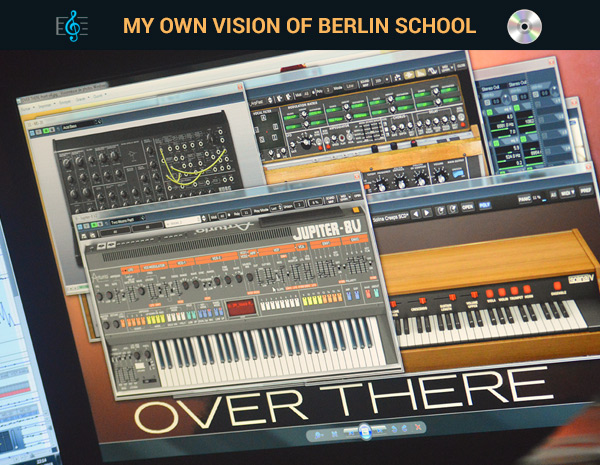 Bertrand Loreau:
"When you start a project, is it thinking about a particular Klaus album?"

Sequentia Legenda:
"When I start a musical project, I have a global idea, a common thread that can come from an image, a title, a memory, an emotion or a sound, but it is not necessarily linked to a particular title of Klaus. The beginning of a new opus is an important moment, it is each time unique and particular. It is a new story that is written,
that develops with sensitivity, meticulousness and passion. I always give myself a little
time between two albums, until, when the time comes, I feel a very strong attraction
that will push me back in front of the keyboards and then allow me to release
my creative impulses."

Bertrand Loreau:
"You use virtual synthesizers but aren't you tempted to work with analogics by privileging spontaneity and improvisation?"

Sequentia Legenda:
"While it is true that I currently only use virtual instruments, I would add that they are hand-picked to correspond precisely to my musical vision. I am very attached to this beautiful analog era of the 70s. In the 80s, I had set up my music studio in my parents' cellar, it was my Ali Baba's cave: PS3200 Korg, Polymoog, Crumar Multiman S, Korg Polyphonic Ensemble PE-1000, ARP Odyssey, Oberheim Two Voice, RE 201 Roland, Korg MS and SQ10. It was then that I initiated myself as an autodidact to subtractive synthesis with great delight.

Today I have a lot of fun with the VST's. The sound is great when you take the time and care to optimize certain parameters. The place for spontaneity is not limited and improvisation can be possible with a little ingenuity. It is not excluded that I may "marry" virtual instruments with "real" synthesizers in the medium term."

I HAVE MY OWN VISION OF BERLIN SCHOOL

Bertrand Loreau:
"You leave a lot of space for sequences in your recordings and you don't try to play solos like the ones Klaus used to do. However, it was thanks to the solos that Klaus relaunched his songs and expressed his particular sensitivity.
You're assuming that choice?"

Sequentia Legenda:
"Yes, absolutely, I fully accept that choice. I have my own vision of Berlin School: a purified vision. I want to go to the essential and propose sound worlds where the listener can freely discover the sonic pearls that are hidden there. The sequencer remains my favorite tool. I am constantly trying to make the loops evolve between them and literally make the sequencers "sing" throughout my compositions! They are accompanied by tablecloths and choirs and sometimes percussion. Among these elements, there are occasionally a few melodic lines.

Solos are still not my priority. I want to let my compositions "breathe" and preserve enough space for the listener to finally imagine his own worlds and solos. It is through the global atmosphere and all its subtleties that one can perceive all my sensitivity." 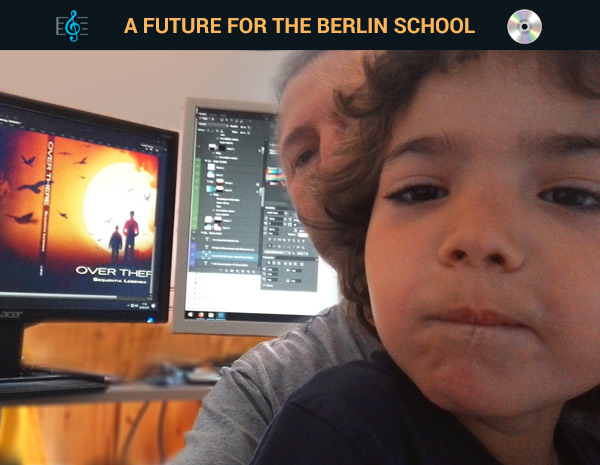 Bertrand Loreau:
"Do you think there is a future for the Berlin School and its very long tracks with its very slow developments? Don't you think that it's only the people who have known the golden age of electronic music who continue to listen to this musical genre?"

Sequentia Legenda:
"Yes, I think that this beautiful musical movement still has a bright future ahead of it and that it will continue to make people dream. The length of the pieces is not a problem in itself as long as the listener is sufficiently interested and willing to take the time to escape and set off on a musical and introspective journey. It's a music that allows you to get out of this tumultuous daily life, where everything has to go fast, too fast! I have a few young people among my fans, some of whom are about ten years old, so yes: I remain confident while keeping my head on my shoulders, because I know that it is a musical niche."

Bertrand Loreau:
"Do the pieces you make have to be long. Is length necessary to install a climate or an emotion? Isn't length also a facility? Tangerine Dream had said well by making "Sorcerer", that to make short pieces was a new and difficult exercise which had taught them much."

Sequentia Legenda:
"There is no obligation, it's just a matter of course for me to compose like that. Personally, I believe that it takes a certain amount of time for the listener to escape and immerse himself totally in the sound worlds I propose and forget everything around him. About twenty minutes is a duration that seems appropriate to me to live this kind of musical journey in an optimal way. It is essential for me that the listener can gradually immerse himself in order to be able to take full advantage of the sound discovery that is offered to him. I don't know if it's a facility, I just think it's normal for me to compose in this way, I'm not to calculate with time, I let my emotions, my sensitivity express itself and let myself be guided according to the creative phase. I can turn this question around and say that keeping the listener to keep in suspense for a while is also a nice challenge."

PLAYING THE MUSIC THAT COMES FROM MY HEART

Bertrand Loreau:
"Your albums are selling pretty well. Does that encourage you to keep producing the same kind of music? Are you influenced by this success or do you produce your music only according to your current desires?"

Sequentia Legenda:
"By exposing my work just five years ago, I was looking to a certain extent and in all humility to make myself known. If today, some people see me as an influential musician from the Berlin School, then it's wonderful. But I have never speculated on any financial manna. I am naturally delighted to be able to sell my albums, but here too, I keep my head on my shoulders. I have a family, a job and I am aware that it is now perfectly utopian to think about living off his music, knowing that my musical style cannot compete with this mass commercial music. On the other hand, I am proud to be able to stand out, to share my passion with informed listeners and to please myself by playing the music that comes from my heart. My creativity is not really influenced by this success, it remains free. A creative freedom that remains in line with my musical vision. I don't think I can play any other music. I don't really have any big rules, but one constant: to please myself first and foremost and for as long as possible."

An extract of what will be the atmosphere of this project


The first six minutes of FLOATING TIME (work in progress).

Here is an extract of the second track of the future album OVER THERE. It is a composition in the purest tradition of the Berlin School of the mid-1970s. Today's synthesizers deliver analog grain tones.

In the distant fog and breaking waves, the ringing of a bell can be heard. A craft floating on an unknown sea advances slowly, then it is a progressive flight towards the heavens. In this mystical atmosphere, it is the rumbling from the sky and the depths of the sea that mixes with floating sequences and whirling sounds...

For this title and for this future album, the choirs of the Mellotron and the strings of the Solina come to be added to the other mythical instruments such as the Modular Moog, the Minimoog or other Jupiter 8. 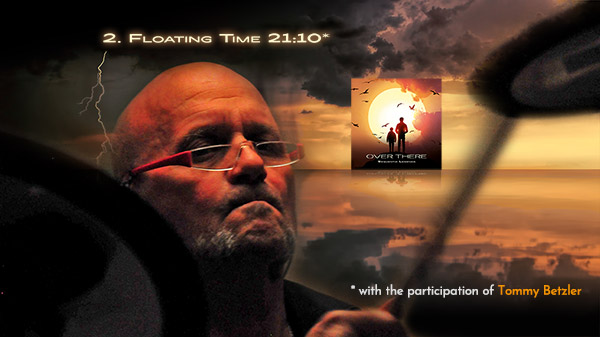 For this title, the German drummer Tommy Betzler (who worked with Klaus Schulze in the 80s) will join me.